The Freighter’s computer simulation ran a sequence of hyper-jump tests.  The long-range conflict sensors displayed a possible neutral system with minimal issues.  This wasn’t always a full proof evaluation, as political fluctuation was on going.   Additionally, there wasn’t enough time to run further scans and simulations for stronger confirmation.  This would have to do.

With little time left before the hyper-jump, I turned to Aria.  “Kailo called you Ambassador, are you really an ambassador?”

Aria looked at me and for the first time I noticed her eyes.  A deep dark blue, but strangely lacking, as if I was looking into mirrors, her true eyes elsewhere.  I feared my own might be the same.  “I suppose, it’s been a long time, but then again time is not really long, it just is,” she said, seemingly lingering on the word time, as if it played some significance on our predicament.  “I represent those who trust me.”

“And who are they?” I dared to ask, hoping for an answer.

“You mean other travellers?”

Kailo’s chief technician gave the signal to jump and the freighter’s hyperdrive engines spooled up to make the transition to hyperspace.  I could feel a steady vibration growing throughout the freighter’s superstructure.

“I mean… others that are lost, which I have found, like you.”

She paused and turned to look at the chief, her eyes shifted down to the computer console.  “There’s a problem with your coordinates.”  She pointed out the minor input hitch.  The chief made the error correction and confirmed it with the other Gek beside him.

“No, not only coordinates error,” the chief said.

On the above mid-platform, two more of the Gek crew were waving their arms in the air and crying out in frustration.

Another alarm sounded on the bridge.  We all looked at the chief, who had suddenly stopped making any sounds—strange behaviour for any Gek—and was looking in the direction of the planet we were orbiting.

“Activate distress signal!” he cried, pointing outside.  From behind the planet four pirate ships were heading directly at us.

“Run new simulation for short system jump, check fuel capacity, check quantity of freighter fuel left from leaking.”  He finally started to gurgle, which was comforting for the other Gek I’m sure.  “Can’t repair leak till in new system, quick!  Now!” the chief shouted orders, while his crew, babbling, scrambled to run the test.

The first two pirates were already circling the freighter, taking pot shots and trying to disable the jump engines.  The other two were fast approaching, most likely they would try to land and retake the freighter.  Even though I had a strange feeling it was Aria they were after, they had already taken the freighter before we took it back, so what were they actually after?

The bridge shook from the hits the freighter was taking on its port and starboard sides as the second pair arrived.  They were hitting our turrets, even though they were non-operational.

“Two minutes to finish test!” one of the chief’s crew confirmed.

“Too late, need jump, jump now!  Engines will be off-line, we bow heads, we failed,” the chief conceded, his shoulders drooping.

It seemed hopeless; we were lost.

“They tricked us, they lured Kailo away and set up this trap and I fell for it.”  Aria seemed more annoyed with herself than with the chief’s failing faith in himself and his crew.

An unknown signal suddenly appeared on the local system display.  It was a message being transmitted openly in the system.  Someone had picked up our distress signal.

“What’s it saying,” I asked, half relieved at the possibility of rescue.

Everyone started cheering.  Aria remained focused as more was being transmitted.

“Look!”  I pointed where two Vy’keen ships were entangled with the pirates.  One of the pirate ships already burning.  “They’re good,” I said.

“But they’re outnumbered,” I pointed out.

“Irrelevant,” Aria added.  “They have the superior ships and are far better pilots.  Vy’keen are warriors.”

Already, the second ship was on fire.  The other two pirates were struggling to avoid the Vy’keen offensive.

“They just scanned us,” Aria continued.  “They’re claiming something about a suspicious meddler.  No, they’ve detected an interloper.”

The last pirate had retreated, their engine burning.  The other three were space dust.  Looking out from the forward observation window across the freighter’s bow, the Vy’keen ships were on a direct glide path for the hangers.

“What’s going on,” I asked, my relief slowly fading.

“Now what?”  I turned to look at Aria, her face had turned as white as her exosuit.

“Take Ancient what!  What’s an Atlas Stone Warrior?” I asked, looking from the chief to Aria.  No one replied.

“I don’t understand, I thought we were being rescued?” 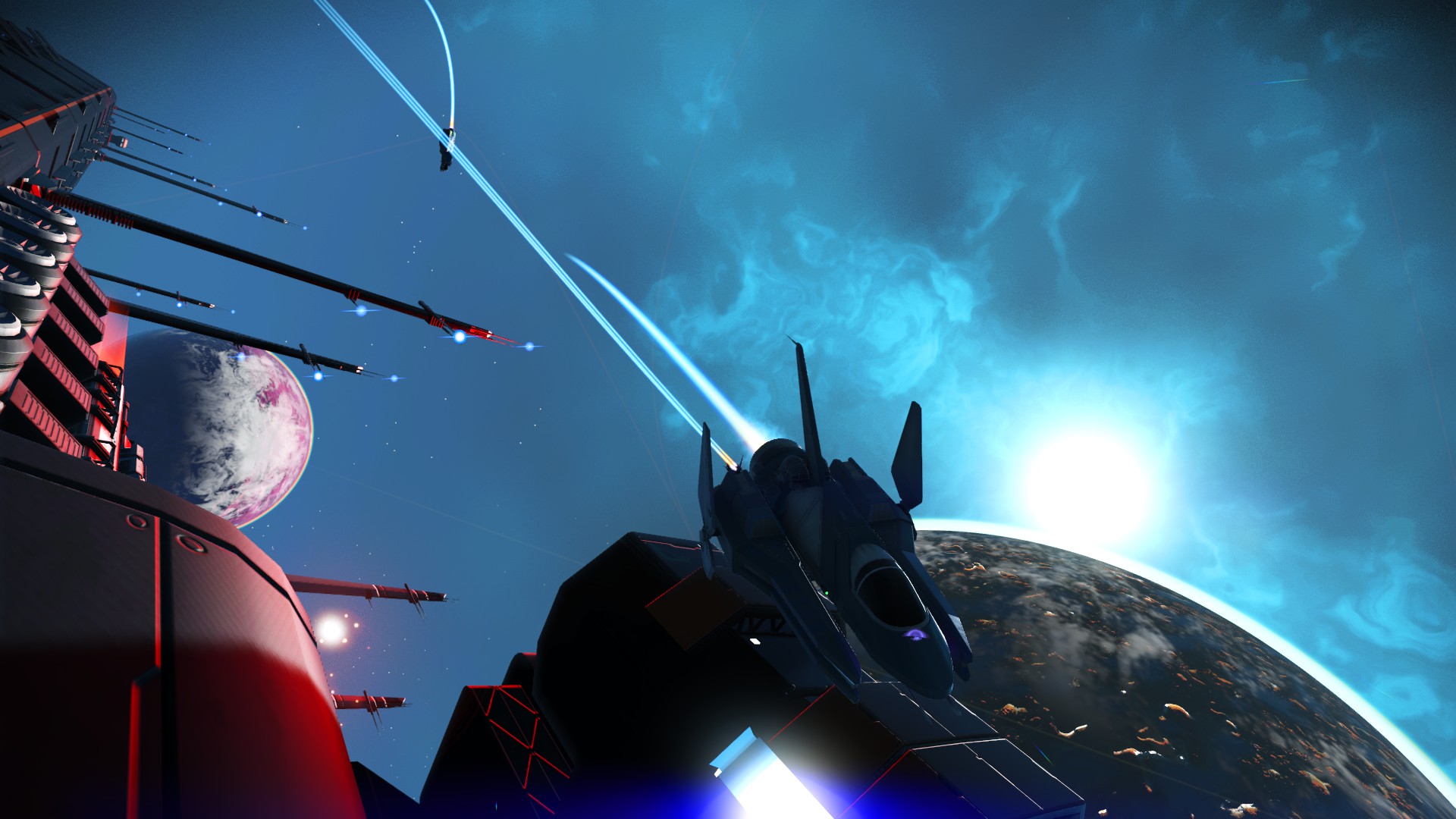 Aria ejected a beacon with encrypted coordinates of the star system we were jumping to.  Hopefully, Kailo would be around to receive them.

There was no more time.  I turned to take one final look in the direction Kailo’s Fighter No. 7 had taken to intercept the pirate horde.  Now just empty space.  Wondering at the sacrifice he was making for us, for Aria.  Aria came and stood beside me and looked in the same direction, both our thoughts were with Kailo.

She turned to me and took my hand.  “I have to go.  I won’t be able to face the Vy’keen. They’re warriors, and these warriors have been looking for me for some time.  You’re all in danger, as long as I stay here.”

“Wait, we can beat them if we stick together.”

“No, too much hate against Atlas, against Gek.  Listen to the Chief, he’ll know what to do till I return.”

She released my hand and quickly left the bridge.

“We’re just going to let her go?”  I turned to the chief for support, he glanced at me for a second, croaked softly, then turned his eyes to the console.

Outside, the empty space around the freighter ventilated, forming a leviathan bubble that swallowed itself and the sea of space around it.  The freighter folded a spherical portion of the vacuum it had encapsulated itself in and vanished, along with two Vy’keen ships that had just landed in the freighter’s hangers.

From the bridge, none of this was truly visible.  There was a slight moment, a hint of what had occurred, something I would call a gentle nudge, which actually felt like something being gulped down a giant’s throat, followed by a sudden loud pop as the bubble burst.

In the next instant, we found ourselves in a new star system with two Vy’keen ships sitting in our hanger, but with a missing hauler.

There is not a fiercer hell than failure in a great object.