Kailo had no idea how many pirates he would be facing.  Initially, he saw one ship, but suspected more were hidden behind the trail formation heading his way.  Obviously, he was expecting more than two pirates, but it was only two he got.  He didn’t complain, bless the Atlas.

The waltz began in earnest when at the very last moment the pirate ships quickly moved to a two-ship line abreast formation, then switched again to a wedge, encircling Kailo.  As long as Kailo stayed wedged, he was trapped.  If he remained trapped in their sphere of death, he would eventually lose all momentum in the fight and fail.  Photon canon blasts lit up the darkness, his shields depleting but holding, barely.  He quickly discovered these two pirates were good, surprisingly good.  Compared to the other pirates the Vy’keens took out, these two knew how to fly.  Knowing the freighter had been left defenceless, the pirates risked their best pilots with Fighter No.7.  The Vy’keens turned out to be the wild card in their ill-fated plot.

Desperate to make a move, Kailo sensed an opportunity in the distance, catching glints of polished blotches scattered in one area of space—an asteroid field.  He would have to try and break free, which was simply impossible in the predicament he was now in.  Restricted in choice, he would have to slowly fly circles and keep them occupied, as he was already doing, firing short phase beam blasts, in the hope of eventually leading them into the mayhem of the asteroid field. 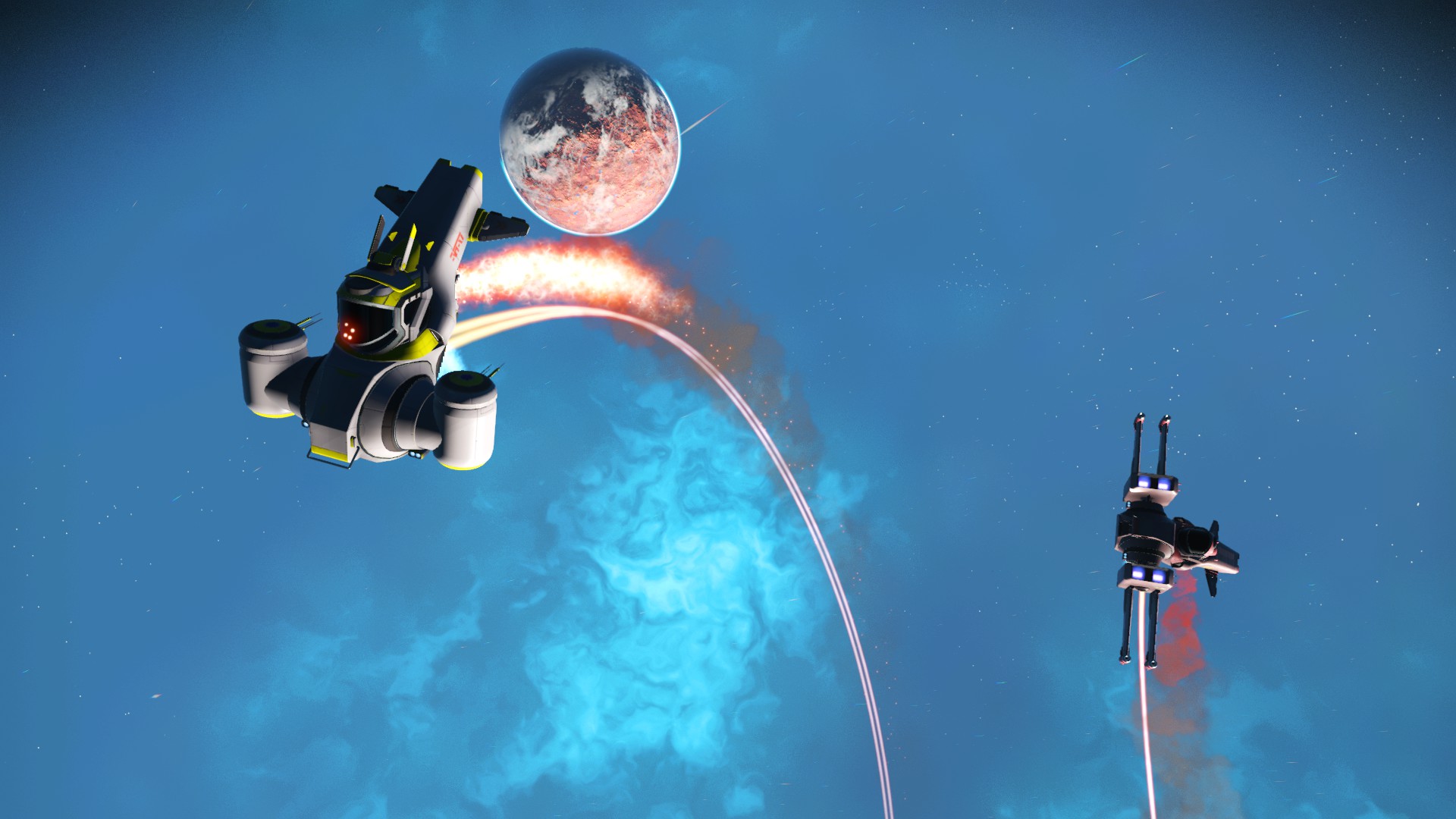 Round and round they went and into the asteroid field they bent.  No longer able to sustain their wedge, the pirate ships broke off formation.  Now they were flying free.  If you can call flying and fighting amongst a thousand spinning rocks, hell bent on smashing your ship, free.

A flashing warning light alerted Kailo to incoming dump fire rockets.  Looking left, out of his canopy, he saw three rockets on a direct collision course.  He broke right, ending the engagement and dived straight into a tightly assembled cluster of rocks.  Passing through them he heard two explosions, followed by a third explosion that knocked out Fighter No.7’s life support.  Now he only had his exosuit.

Time was against him.  Unable to determine what other damage Fighter No. 7 had sustained, Kailo pulled together all the pilot skills he had mustered over his lifetime.  Spinning, twisting and with clever looping at just the right moment, he managed to get behind one of the two pirate ships and fire his own salvo of rockets, taking out one of the two pirates.  Unfortunately, the other pirate ship, seeing a window of opportunity, had also slipped behind Kailo.  He fired!  Slicing part of his wing tip before Kailo could pull up.  But pull up he did.  If only to avoid the incoming pirate ship’s debris from ahead.  The second pirate, however, never saw it.  Blinded by rage, the pirate kept firing the beam blast in a desperate attempt to slice Lucky No.7 in half.  He never saw the wreckage, until it was too late.

Kailo spent the next few hours on a giant piece of peppered rock in the asteroid field that had saved him, making repairs to life support.  The ship’s cut off wing tip would have to wait till he either, returned to the freighter, or found a space station that offered repairs.  Landing on a planet was out of the question without the aerodynamic support of the missing wing tip.

He decided to make repairs at a space station but changed his mind when his scanner picked up a faint signal.

It was the freighter.

On arrival, Kailo was greeted by a flotilla of floating debris, but no freighter.  His initial fear was that the freighter had been destroyed.  He cursed and wept, but on closer inspection he saw it was only the wreckage of the pirate ships, but how?  The freighter could not have done this, its turrets had been devastated.  Suspecting something unanticipated had occurred, he searched for clues until he stumbled upon the beacon, but no answers.

The beacon belonged to the freighter, and if Aria was the one who had ejected the beacon, the encryption codes they shared would successfully decipher the message.

The codes worked.  She had left behind the coordinates to another star system.

They had escaped, but something else more dangerous than the pirates had intervened.   Fearing the worst, Kailo started to punch in the coordinates just as a shadow crossed his canopy.  A bulky hauler had appeared out of nowhere and stopped, nose to nose, with Kailo’s Fighter No.7.  Looking across into the hauler’s canopy, he thought he saw a ghost looking back.

It is well that war is so terrible, otherwise we should grow too fond of it.