So much had happened—so fast.

There had been no time to process it all.  I stood still, allowing myself a moment to reflect and focus on my position and all the other players.  The crew were positioned at different stations across the bridge, monitoring repairs on the freighter and awaiting further orders.  The chief and I had left the central navigation console and had walked up a small flight of stairs to an observation window overlooking the landing bay below.  The two Vy’keen were standing alongside their ships loading big rifles with ammunition.  Around their waists I noticed two holsters, one held a pistol and the other a strange alien multi-tool weapon, the head of which looked as though it consisted of sharp teeth.  They were dressed in heavy battle gear. 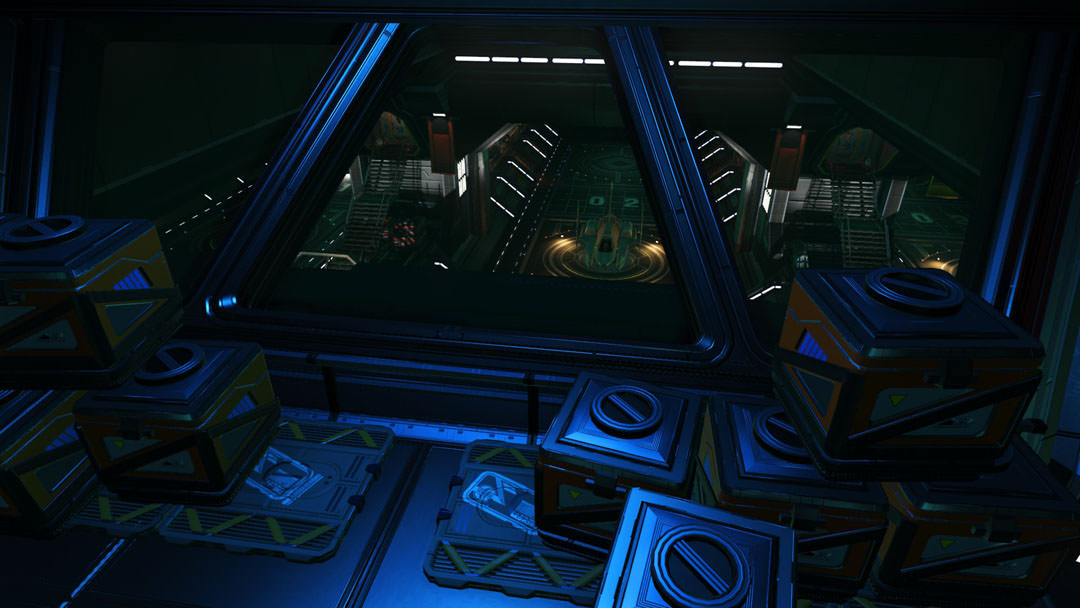 “Not much time, listen,” the chief said, grabbing my arm.  “When Vy’keen come you say that Gek your slaves.”

I turned to him, startled by what I was hearing.  “You can’t be serious.”

“Chief very serious, no other way.  Vy’keen kill all Gek if you not say so.  Sworn enemy since time of Gek First Spawn, when Gek ruled galaxy.  We’re not of First Spawn.  First Born very bad Gek, cause great destruction to others.  Much has changed but one thing certain, Vy’keen not forget.”

Gek ruling the galaxy, how was that even possible?  The chief and Kailo were traders, not murderers.  As far as the Gek causing harm and destruction to others… I found it hard to imagine this cute race of little folk would ever want to harm anyone.  But the chief said they once did, so there might be some truth in his story.

A sense of dread filled the bridge.  All the Gek had turned in my direction, focusing solely on me.  I felt very uncomfortable.  The chief and I watched as the Vy’keen made their way up the landing bay stairs.  The chief turned back to look up at me, his face filled with terror.

“You are Traveller, Vy’keen not hurt you.  In written Saga of the Vy’keen it is said, word for word: ‘The noble Travellers will be spared.  Their journey through the cosmos shall not be thwarted.  So it is decreed.  The will of Hirk the great commands it.’  But you must be strong, if Vy’keen sense weakness they not show mercy.  Challenge them as Captain of freighter, show Gek are your slaves.”

The chief answered, “With deeds and words.  Show no fear.  If traveller has to, strike chief, show strength and control over poor foolish Gek.  Then with words, tell that Hirk decreed so, Hirk great Vy’keen leader, and give gift.  Show strength and gratitude for Vy’keen saving freighter with pitiful crew of Geks.”

The chief led me back to the central navigation console. “Wait here.”

There were storage containers positioned in different areas of the bridge, he opened one and removed a small metallic box and brought it back to me.

He opened the box. “Here, this gift you give to Vy’keen.”

Inside was a dagger with a simple cross handle and a strange blade banded in burnished grey and white.  The ending continued in bands but changed to red at the blade’s tip, as if it had been dipped in blood.  “Important ceremonial weapon, respected by Vy’keen and given as gift to honour courage and boldness.”

I looked at the blade and said, “What if they don’t accept the gift and refuse my gratitude?”

“They too vain to refuse, they live and die for battle and honour.  They not refuse,” the chief said.  I took the box from the chief’s trembling hands. “One more thing, breathe this—only a little—will help you sound braver, more Vy’keen.”

From a concealed compartment he took out a strange looking mask. “Grahgrah has gas, increase lung size, you sound Vy’keen and earn respect.”

He placed the odd looking Grahgrah mask over my face.  “Inhale little.”  I felt my lungs expand like a balloon.  Quickly, the chief pulled it off and placed it back into the concealed compartment.  “Enough, too much and traveller go cuckoo crazy.”

I tried to speak.  My voice sounded profuse and angry, brash and rough.  I looked at the chief hoping for answers.

“Good.  But not forget, show no fear, only strength.  Chief not speak again till Vy’keen gone,” he said, and made a nervous croaking sound.

The chief fell silent as the Vy’keen appeared on the bridge from above, their menacing rifles pointing down at us.  The chief and his crew had cowered down, frozen in fear.  For some strange reason I felt no fear and remained where I was looking up at them, almost challenging the Vy’keen with my glare.

“Welcome, brave warriors,” I called out, surprised at my own brashness.  “I am a Traveller and the Captain of this fine, but battered freighter.  Foolish Gek are my slave crew.”  I saw their little eyes wandering around the bridge.  “It is truly an honour to have you on my freighter, come, approach, so I might offer you tribute and reward.”

Seeing me and hearing the confidence in my voice seemed to diminish their assault.  They walked down the stairs and approached the navigation console, weapons slightly lowered, but their fingers still on the trigger.

Standing a head over mine, I could see why the Gek feared them.  Though humanoid in stature, they were large and repugnant.  Particularly, their huge ugly heads and protruding jaws, which extended forward over a large hunched body.  Their skin was thick and scaly, and generally tinged green.  Parts of their head had what looked like plates or shells covering the skin, with dents, wounds and hollows; possibly battle scars.  It wasn’t clear if it was part of their metabolism or face armour.  The one to my right had four horns, which pointed up from its cheeks and temples.  One was broken.  A red shell covered his upper lip, extending to the lower forehead.  The other had no horns, but its jaw consisted of two long tentacles and a blue face shell, which covered areas of the face and the upper forehead.  For a moment, I contemplated if the tentacles represented a gender difference, but once more it was pure speculation.  I had no idea if they were male or female, or neither.

Their faces closed on mine.  A foul smell emanated from their heavy breathing, most likely vile exhaled from their innards.

The one with the horns spoke first, its nostrils juddering.  “Poi! Biyedexoi iazhoulin.”

I turned to look at the other Vy’keen with the tentacles. “It not know language, but say you pathetic interloper.”  They both laughed, sounding like a pair of dogs growling and barking in excitement over an expectant meal.

I ignored the provocation and extended my arms, while holding the gift with both my hands.  They both stopped to look at the dagger and then at me.

“Traveller and captain of freighter, with pitiful Gek slave crew, wishes to thank and honour Vy’keen warriors with ceremonial blade,” I said.

“What?” I obviously missed something the Vy’keen did not translate.  I could see the chief beside me agitated, he was about to speak—I struck him.  “Silence! Pathetic Gek, dare to speak again in the presence of these honourable warriors and I will throw you out the nearest airlock!”

Both Vy’keen laughed.  But then tentacle-face—I decided to give them names—grew grim and spoke, “Vy’keen High Command demands Ancient Atlas Stone Warrior.  Hand over to us!”

I stood my ground.  “I don’t know what you’re talking about, there’s no Ancient Atlas Stone Warrior on this freighter.”

I did not need to have it translated to know they were threatening to kill us.  I lifted my hand to stop them and said, “Listen carefully, and with respect to words of the Saga of the Vy’keen.”  I paused, trying to remember the exact words the chief had said.  “Hirk spoke, ‘The noble Travellers will be spared.  Their journey through the cosmos shall not be thwarted.  So it is decreed.  The will of Hirk the great commands it.’”

They both froze.  Even horn-face understood what I had just said.  They growled, exchanging angry words in Vy’keen amongst themselves.

Tentacle-face spoke first, “Give us girl and you free to go, will not harm Traveller.”

“But Aria is a Traveller as well, like me!” I insisted.

“No!”  Tentacle-face shouted.  “Not Traveller, girl is abomination.  She is ancient beast, worships oppressive false god Atlas and its army of Aerons, its sentinels.”

I turned to tentacle-face, who translated, “Girl ancient beast, sacrifice the beast!  Blood for Hirk!”

“We search ship, you come with us now.”

But horn-face seemed fixated with something and did not follow us.  We turned to look.

Looking out from the bridge’s panoramic windows, another freighter had appeared on our bow.

Undeterred, the chief spoke for the first time since the Vy’keen had arrived on the bridge.  “Sentinel Starship Carrier.”

I looked back only to see the Vy’keen were gone.

Courage is being scared to death… and saddling up anyway.