One, two, three, four, five sentinel ships were heading directly towards us.  From the blue hanger doors, the Vy’keen ships flew out of our freighter on an intercept course.  The sentinel ships, however, abruptly broke off their attack and turned back to their freighter.  “Ha! Sentinels drawing Vy’keen ships closer to freighter’s added fire power, silly Vy’keen,” the chief said.  Steadfast, the Vy’keen hurtled after them, indifferent to the odds against them.  Their hate for the sentinels bypassed any other emotion or purpose.  “Vy’keen now berserk, no longer care about us,” the chief noted.

I breathed a sigh of relief, feeling the gas already wearing off.  Putting on the tough guy facade had worn me out.

“By the by, Traveller did fine job and saved crew.  But why sentinel freighter appear here now?” the chief wondered.

All the Geks gathered round, gurgling and cheering in their usual, peculiar way, taking turns to give me a hug.  One of the Gek crew shouted, “Uci, lefabeig!” And we all turned to look outside.

Two long contrails from the freighter’s starboard trailed into the hanger bay.  Contrails of two ships that had landed, and no one had seen coming.

“More intruders!” the chief cried.  Panic spread amongst the Gek.

We ran up the short flight of stairs to the hanger bay observation window and looked down.  I couldn’t believe what I was seeing.  Fighter No.7 and the hauler.  Kailo was helping Aria down from the hauler.  She was covered with a cloak and looked ill.

The chief and I raced down to help them.

“Take me to the navigation console,” she pleaded, her voice rasp and brittle, like a child spent from crying.

Together, we brought Aria up to the bridge and placed her on a chair beside the console.  Her face was white as a ghost.  The chief gave her a warm tea to drink, helping her hold the cup to her lips; lips which had lost their luster.

The chief briefed them by recounting how we dealt with the Vy’keens.  Aria looked at me and smiled. “You did well,” she said and took my hand.  Her hand was as cold as ice.  I held it with both my hands, trying to give her my warmth.  She held on gently.  I looked at her as she closed her eyes and for a moment seemed to be sleeping.

She opened her eyes.  “Time to go…” she said and turned to the chief, “… now!  I’m losing control.”  And for the first time I saw it, clear as day.  The cloak she wore had fallen wayside, revealing a dark impression on her chest.  A burning red sphere, which was pulsating faintly.

“They called you an abomination, they said you’re not a Traveller.”

Aria turned to me.  Her hazy eyes looked like dying orbs fading into the night.

“The Vy’keen don’t want to understand, they’re filled with rage.  They think I’m part of it.  They hate the Atlas, calling it a false god.

She took her time, turning to see if the chief was preparing to leave and then spoke, “A broken god, maybe.”

“And what about you, Aria.  They called you the Ancient Atlas Stone Warrior?”  I looked to her chest, at the soft sphere pulsating on her fragile body.  With effort she pulled the cloak over herself, covering the red glow.

“I am what I am, but what I’m not is the Atlas.  The Ancient Stone was part of the beginning and is still accessible, but only because I have survived this long.  Through the passage of time oscillations and unknown resets, I have learnt the code and wavered each end, only to return to each beginning.  I was there in the beginning and I was there at each and every end.  But now it’s time to go.  I’m tired, very tired of this.  The Atlas is unreliable and volatile.  Each of its incarnations share its cold core.  The Travellers are all I have, you and the others, your presence gives me hope.”

“Did you bring that sentinel freighter here?” I asked her, genuinely curious.

“Yes, I had to find a way to distract the Vy’keen, to get them off our ship, but I also had to help Kailo get back.  By coupling with the Atlas, I was able to summon the sentinel freighter here.”

Now I understood why the Vy’keen called her an abomination, it was her connection to the Atlas, they think she is part of it.  She can link to the Atlas, to access data, instructions and information for her benefit; but it weakens her when she does.  Like a virus attacking its host, the host’s antibodies fight back, thus weakening her.  But all of this did not explain how she was able to do this in the first place, and more importantly, I still could not understand what she was, a girl or an abomination?

“Ready to jump.”  Turning to Aria, Kailo asked, “But where?”

“Give me the panel,” Aria requested.

Kailo passed her the hand-held input panel to the central navigation console.  Aria punched in the coordinates.  “We have to get to the centre.  There’s not much time left before things fall apart.  First, however, we have to find Tegiko.”

“Why do we need Tegiko?”

“I pawned it for money.  We needed money, but now we need it back.  Otherwise, we won’t be able to get to the centre.”

I was confused.  “What do you mean, centre?  The centre of what?”

“The centre of the galaxy, of course.  That’s where the Black Portal is, and my ship is the only one capable of taking us there, or rather, finding where it is.”

There was that same loud pop, like a bubble bursting, as the freighter jumped.  Leaving behind the sentinels and Vy’keens entangled in their brawl of historic animosity.

We emerged into a prosperous trading system beside a massive space station, shaped like two pyramids joined at their base.  A giant dome dominated the point of one pyramid, and the station’s propulsion engine retained the other.  The entire structure was awash in orange and green borders, lit from a single bright sun.  Aria was back on her feet, her complexion already returning to normality, which was not surprising, since she was no longer linked to the Atlas. 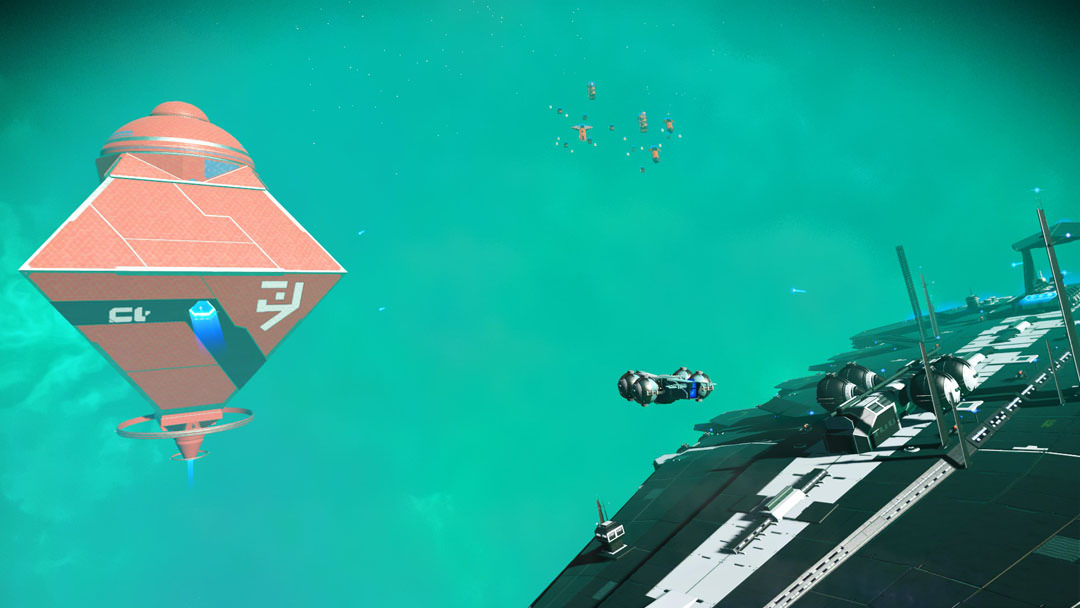 “Kailo, load up the hauler with all the resources we’ve collected, it should be enough,” Aria said.

“Tegiko has sent signal and is waiting,” Kailo said and left with the crew to help load up the hauler.  The chief remained on the bridge, while Aria asked me to accompany her to the hydroponics bay.

She sat, while I remained standing, overlooking the bay.  The air was full of aromas from the diverse plant life.  “This is where I find solace, among the plants and the flowers.  I feel their energy, which they so kindly share with me.”

She gestured I sit beside her, which I did.  There was something overpowering in her movements, a majesty I just could not place, but was ever present.

She turned to me and asked, “Do you remember anything from before?”  She checked to see if I understood the question.  “Before you lost your memories?”

I tried to remember what I could, focusing on fleeting moments.  My eyes fell on a blossoming Star Bramble beside me, its cluster of blue white flowers glowing magically like star light.  “I remember a late spring night as a child, a clear sky full of stars. I’m wandering alone in a garden that’s bigger than anything I’d known till then.  I think it’s my home, everything seems familiar, and I’ve sneaked outside; I shouldn’t be outside, but I am, and I feel excited.  The rest is a blank.”  I turned to look at Aria, her eyes were so deep in reflection it frightened me.  She did not say anything but waited for me to continue.  “There’s someone there, but I can’t see them.  I think we were friends, or at least I knew them.”  There’s another gap, another time.  “I’m inside a building, it’s not my home.  I can hear voices, students.  It’s a university.”  I was still focused on her eyes.  Mirrors, her eyes were mirrors reflecting my thoughts.  I should have been terrified, but the soft humming sounds emanating from the hydroponic trays seemed to be nullifying my senses and any response.

Time shifts again.  “I’m in a sunken room.  Sitting in a reclined chair.  There are wires and cables stretched out over the floor leading away from me, up into some other spherical room and everything is connected to me.  Looking up, there’s a woman looking down at me from behind a window.  I can’t see her clearly, so I’m unsure if I know her.  Darkness.  Blinding light.”  I felt my body shivering, perspiration trickling down my face.  I could sense Aria analyzing my every word.  “Shadows.  I’m cataloguing all these plants, strange life forms, so many geological formations, and worlds—endless worlds.  There’s an accident, a malfunction with my ship, or not… I feel severed from the connection.  I’ve crashed on a planet.  I’m lost; lost from my mind.  I don’t know who I am, and nothing seems to be working.”  I stopped and looked down at the floor, it looked real, solid.  I looked up at Aria again.  “Then Kailo found me.”

“Interesting,” Aria stated.  “We seem to share an event, a possible reason to continue.”

“Your journey here seems familiar.  I’ve many memories, I think one of them is you.”

“If we reach the centre maybe you will.”

“We’re ready to go.”  Kailo was standing at the hydroponic bay doors, looking fretful.  How long had he been standing there?

Since we cannot change reality, let us change the eyes which see reality.