The flight over to the space station was short and uneventful.

Strange, giant symbols adorned the outside of the station.  Most likely a welcome or name, but I had no idea what language they were in, nor what they meant.  A fleet of freighters, resembling an armada of sailing ships anchored in a port of call, were parked near the station in perfect formation.

On final approach our flight was taken over by the station’s automatic docking system, which landed the hauler safely inside a vast hanger.  Smaller ships, belonging to traders, were busy coming and going.

Trade Envoy Tegiko was waiting for us in the station’s main lounge.  Tegiko’s sharp and narrow eyes dominated the shrewd trader’s face.  I could see him busy calculating, considering and observing our every move.  Around his eyes thick skin was puffed up from lack of sleep. Caused, I suspected, from staring at numbers on his hand-held tablet and the monitors around him.  All of them displaying trade market prices and commodities.

Tegiko was as wealthy as a Gek could be, dressed in a lavish gold and pearl coloured exosuit.  A large spherical head piece encircled the top part of his head like a crown, most likely concealing some sort of technological wizardry, which connected directly to enhance his brain.  At least that was the impression it gave me.  “Welcome, Ambassador,” Tegiko said, bowing to kiss Aria’s hand.

“Good to see you again, Tegiko,” she replied.

The brief introduction was followed by a long trade discussion between Aria, Kailo and Tegiko.  I sat to one side and eventually closed my eyes while I waited patiently for the talks to end.  It lasted for close to an hour, and was spoken in Gek, so I understood nothing, other than the initial welcome.  Finally, the talks concluded with a deal that everyone was happy with.  The closing stage involved the exchange of the merchandise for the return of Aria’s ship, which would occur on a planet at an undisclosed destination.

“Where will you go now?”  Tegiko queried Aria, changing the language from Gek and the subject from trade.

“I’ll tell you when I have my ship,” Aria said.

Aria and I left with Tegiko in his hauler.  Kailo followed in our hauler, piloted by one of Tegiko’s associates.  We were seated in the back of each hauler, our view of the outside obscured.

“Certain events are indicators,” Aria began.  “Yours and mine seem to share a commonality that isn’t easily brushed aside with coincidence.”

I wasn’t sure what she was trying to say.  She noticed my uncertainty.  “We are what we are from the memories we share; from the experiences we live.  What are we, if not what we observe and absorb.”  In turn, I noticed a weariness in her voice.

The haulers had penetrated the atmosphere and were on a landing vector.  I turned to Aria and dared to ask, “Who are you, really?”

Her eyes flashed at my question; the weariness was replaced by irritation.  I could sense her trying to process an answer, she only said, “A beginning and an end.”

The haulers dived towards a small dark opening on the face of a mountain as I caught a glimpse of the world we were on—cold blue, ice and snow—before it suddenly went dark.  The aperture was so large it swallowed both haulers.  We landed inside a large cavern within the mountain where a base, illuminated with floodlights and hidden deep inside the cave, had been built in the dark hollow against the rock wall.  The haulers took up two of the four parallel landing pads.  The third was empty and the fourth was occupied by an odd, white, squid shaped starship.  Aria’s ship. 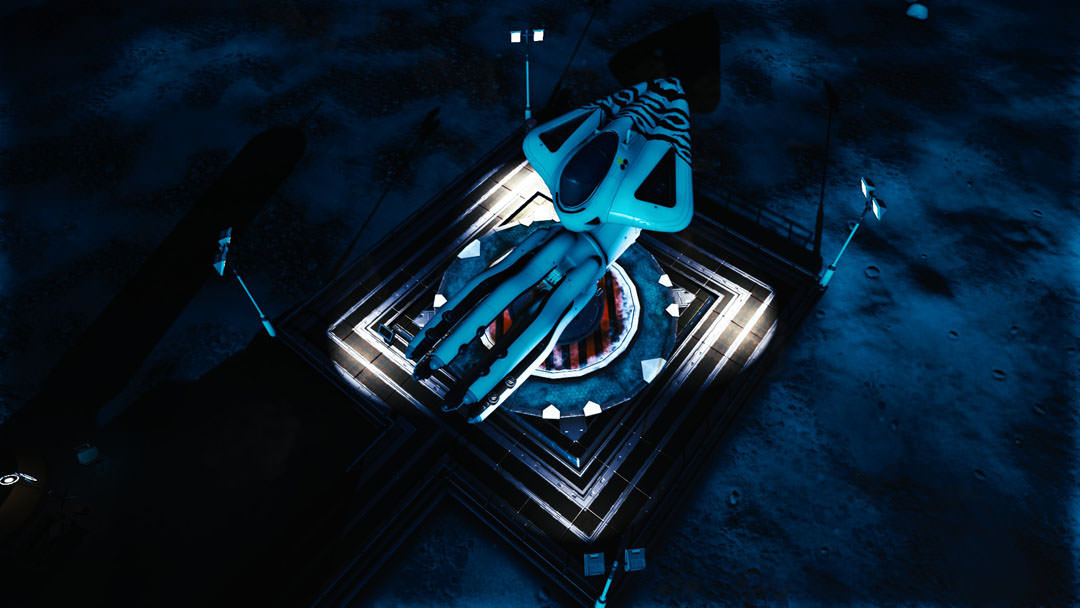 We left the haulers and made our way across the freezing cave into the subterranean base, where hot soup was waiting for us.  The four of us sat around a table with a direct view of the outside cavern.  The floodlight’s glow radiated across the cavern’s ceiling, revealing bizarre formations of enflamed orange rock and stalactites in blue.  Strange red orbs floated in midair, moving slowly along the icy air currents, until they finally disappeared deeper into the cave’s maze of tunnels.

The conversation continued from where it had left off aboard the space station.  Aria insisted they no longer talk in Gek—due to my presence—and since trade was no longer the discussion on the table.

“So, Ambassador.”  Tegiko’s eyes narrowed into a smile.  If you can call a quivering beak, along with his eyes, a smile.  “Now that you have your White Squid back, what next?”

Aria did not hesitate to answer, “The centre, we’re heading for the centre.”

“Very long way.  Why spend so much energy to get to centre, nothing there but lost souls.  Friends should stay away, stay here with Tegiko.  Only death at centre, darkness swallow friends.”

I noticed Kailo fidgeting nervously.  Aria took his hand and held it firmly, trying to calm him.  “You can come with us, you’re more than welcome, Tegiko.  We don’t want to leave any of our friends behind,” Aria said.

“No, thank you,” Tegiko said.  “I have good life, nothing more to wish for, have everything a Gek could want.  Wealth, good food, happiness and sadness.  If end comes, let it come.  If time to go, then Tegiko go.  So be it!” he chirked, while lifting a spoonful of soup to his mouth.

Kailo had already finished his soup and was looking outside at the White Squid.  It was a huge starship, bigger than a hauler and very alien, very organic in design, compared to any other ship I had seen.

Kailo turned to Tegiko and nervously asked, “Who are lost souls?”

“Others—I don’t know.  Tegiko only hear rumors of ships getting too close to dark centre.  Eaten by darkness, only souls left, haunt the darkness with cries and curses of ‘Go back, go back!’ they say, when you go too close to centre.”

I could see this discussion was making Kailo worse.

“Just tales to keep the curious away, that’s all,” Aria said, still holding Kailo’s hand.  “We’re not afraid of the darkness, it’s not the first time I’ve faced the darkness with the White Squid.”

“Maybe,” Tegiko said, turning to Aria.  He looked worried as his eyes met hers.  “You still need help to go to centre.  Even with White Squid, it take very, very long time.  Too many dangers, too many risks.  But there might be better way.”

He removed a small object from his pocket.  “Here, take this,” Tegiko said, passing a small chip into her hands.  “This will show way to hidden Space Station.  Station appear as anomaly, but safe.  Go there and ask to speak with Priest, tell him Tegiko sent you.  He will help you to reach centre fast.”

How a priest was going to help us reach the centre, I had no idea.  Aria took the chip without asking any further questions.  I watched as she connected the chip to a small opening in her sleeve’s wrist.  The chip slipped in and disappeared as the opening closed.  Her eyes moved up from her wrist and fell on us, no one spoke as we watched her, and then she suddenly stood up to leave.

“Time to go, we don’t want to leave those poor lost souls waiting.”

It is better to light a candle than curse the darkness.