I remember floating on water.  My face to the sky.  A blue sky.  I remember dreaming that behind the blue, the sky was full of stars.  Yet, they were invisible to me.  Like all those worlds out there.  Invisible and unreachable.  I heard voices, there were others; others dreaming like me.  I caught a fleeting glimpse—a pale reflection of a face—and then it was gone.  Water slipped over my face and I went under.  For a moment, I felt a strange urge to remain submerged.  I was still breathing.  A contraption was connected to my mouth and there were cables coupled to my head and body.  I was inside a glass casing and my body was in a strange suit.  It felt safe here in my shadowy, liquid universe.  I didn’t have to wonder about those other worlds anymore.  Just safe and snug like an embryo inside the womb.  Then it exploded.

The boom brought me back from where I was.  It was fading.  A memory?  Maybe, of where I was.  But I wasn’t sure, I couldn’t remember being inside a glass casing, but the suit felt familiar.  It felt like my exosuit.  I wasn’t even sure if what I saw was my own memory or another’s.  If there was another, there was no face, no image.

On opening my eyes, the memories were gone, and I was with Aria and Kailo in the strange White Squid.  I looked up at the canopy, was this another glass casing?  OK, get a grip, you’re imagining crazy stuff here.  Most likely the effects of the psychedelic hyperdrive jump.  It was playing with my head.  How many more jumps to go?  I had no idea.  All I knew was that I dreaded the thought.

We were in a new system of worlds, floating in a marble blue expanse.

“We made it,” I said, feeling relieved.

“Is it another Black hole?” Aria asked.

“Negative,” the ship replied.  “Anomaly is an artificial structure.”

Aria nodded, “Yes.  Lock onto the Anomaly and take us into visual range.”

It wasn’t long before we were in range of a large spherical object, floating in a stationary position out in the middle of nowhere.  Its outer structure looked to be made of titanic plating.  Old and weathered by time and space, like some ancient citadel in a state of decay, long forgotten.  A dark, haunted memory, all alone in the night. 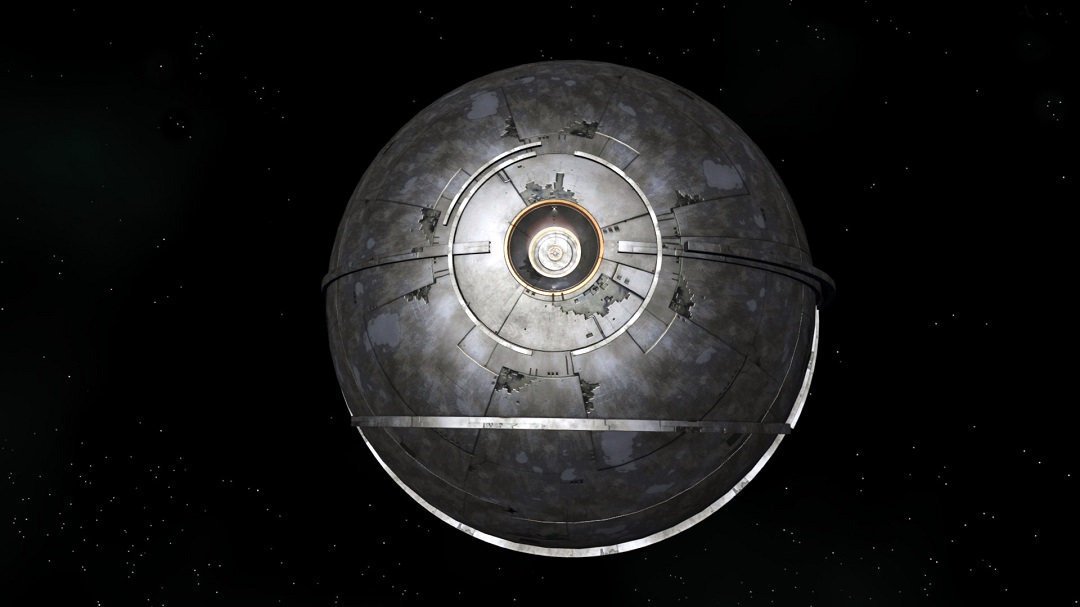 Aria activated a small devise on her sleeve wrist.  “Open a communication channel to the sphere,” she instructed the ship.

“You have an open channel, Aria.”

“Hello,” Aria hesitated, considering her next words.  “My name is Aria, I’m a friend of Tegiko.”  She waited for a reply.  Nothing.  “Tegiko has sent me, to speak with the Priest…”  Her tone changed, she was focused and direct.  “…and so, I have come, to ask for your help.  Please, can you help us?”

There was a long silence.  Maybe the station had been abandoned long ago, which would explain its deteriorating condition.  But there were gigantic half-rings on the outside of the station still revolving, like some antique spherical astrolabe in perpetual motion, keeping pace with the heartbeat of some dysfunctional universe.  Someone, or something, was keeping this old machine tuned, oiled and running.

“No one home?  Maybe that’s good, maybe we go now, before we wake up whatever in there.  Yes?”  Kailo said, his face somewhat pale.

If there was something or someone in there, it must have heard Aria’s message.  Machines don’t sleep, so the message must have been received.  Aria remained quiet, still and unflinching.  She waited, while Kailo and I jittered about nervously and impatiently.

“Why taking so long?” Kailo asked.

I added, “Maybe we should send another message and see…”

A single, circular portal suddenly lit up, like the pupil of an eye peering out at us, marking an entry point.  The three of us froze.

Without warning an invisible hand seized the ship and we started moving towards the ominous sphere’s single eye.

There’s always another story.  There’s more than meets the eye.