“What’s happening?” I turned to look at Aria.

As we got closer, the portal spun half round and proceeded to unlock.  Sliding open and pulling the ship through a tunnel of red loops.  At the far end of the tunnel, another portal slid open and we soon found ourselves within the sphere.

The station had taken control of the ship and placed it down on a single, central landing pad inside the sphere.

“Well that went smoothly,” I said.

“All of us?  Shouldn’t someone stay here with the ship?” I asked.

How could Aria be so sure we were safe?  Sometimes I envied her certainty.  At other times it worried me.  I think my affection for her felt stronger than I wanted to believe.  Stronger than my own self-preservation, hers taking precedent.  I couldn’t imagine anything more important.

“Friends not need worry.  Kailo will protect.”  Kailo said, as he brandished his alien weapon.

Aria moved towards him and gently took the alien multi-tool out of his hand.  “You won’t be needing this.”

Placing the weapon away, she questioned our motives.  “What were you thinking?  We’ve come here to talk with the Priest, to ask for help.  Do you honestly think if we go in waving weapons about, we’ll win any sympathy, or get the help we need?  We’re not going to get any help if we show hostile intentions.”

“I know, and I understand.  But I can take care of myself.”  Aria turned to look at me.  “You both need to realise that.  Now, follow me and let me do the talking.”

We followed Aria away from the ship up a long ramp towards another internal sphere within the spaceship.  It too had half rings rotating around its circumference.  At the end of the ramp we were greeted by another ceiled portal, marked by three red lights that turned blue as we approached.

A door opened and the three of us walked up a bridge onto a round platform in a spherical room, glowing in purple, crimson auras.  This was the centre of the sphere where two white blue beams met.  One rose from within a hollow, round podium in the floor.  The other fell from the ceiling, meeting at one juncture—the space station’s reactor core—harvesting energy from a micro-star trapped between the beams and three spinning rings in mid-air.  Who could have built such advanced technology?

Next to the podium stood a tall, cloaked figure holding a data pad in one hand.  It turned to look at us and bowed, while placing its free hand to its heart.

Aria bowed placing her left hand to her heart.  Kailo and I did the same.

The figure started chittering.  The sounds were less organic and more mechanical, the way sounds are played through a synthesiser.  The body behind the exosuit looked almost humanoid.  But appearances could be deceiving.  The head was inside a long, elongated helmet, unnaturally large and impenetrably black.  Except for three, blue vertical lights on the front visor, possibly cameras.  Deeper inside the helmet, where one would place the forehead, four lights danced round each other… it was processing, thinking, as it observed us. 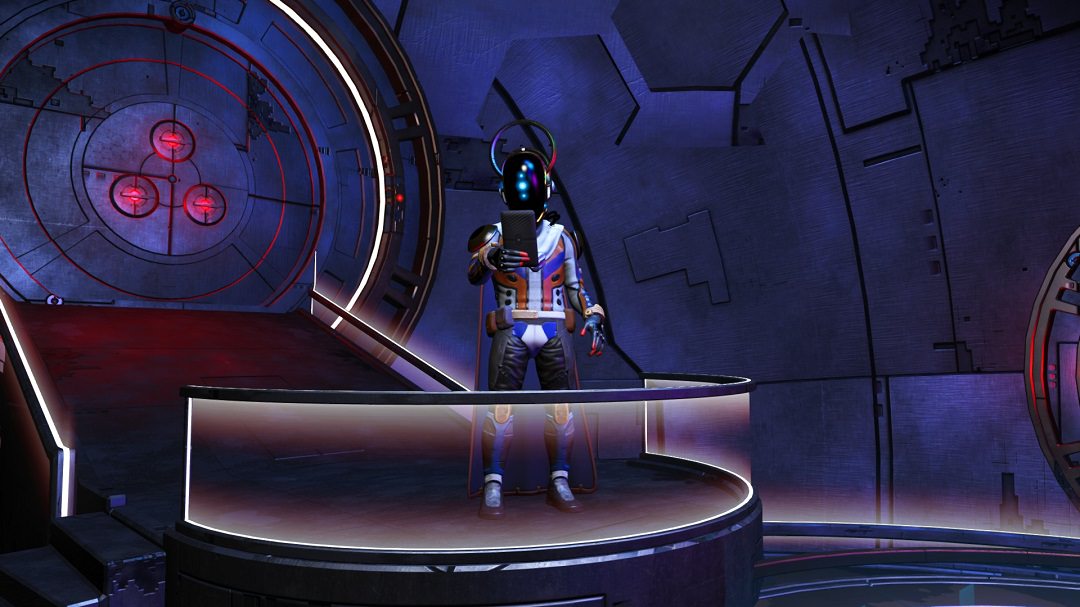 This was no biological entity.  It… they… the Priest had no gender.  It was some form of mechanical species.

That was confusing.  Did it just say it was a pleasure to meet us?  I looked to Aria for confirmation.

“Priest Entity Nada, thank you for seeing us.  And it’s a pleasure to meet you, too.”

Aria said, “Tegiko gave us the coordinates to your station.  He said you could help us reach the centre of the galaxy.  That you know of a way, a faster way to bypass the darkness and the endless emptiness.”

The Priest turned its head slightly to the side as it turned to look at us, while the lights in its oversized helmet were spinning and pulsating.  It started to chitter in Korvax, finally turning to Aria.

I noticed two power cables on its left shoulder, feeding into its body.  Hints of powered links to its wrists, torso and spine.  This was a machine body, a robot body, a Korvax.

I turned and whispered to Aria, “What’s it talking about?  I don’t understand, does it need more information from us?  What does it mean by simulation?”

“Not too sure what it wants.  Korvax aren’t native to this universe, though I have come across several of them in systems under their jurisdiction.  Don’t underestimate them, beneath all that chittering and incomprehensible dialogue, they are highly intelligent.  All of them are linked into what’s known as the Korvax Convergence Interface; shared knowledge and information gathering.  That’s all they care about.  But this one, this Priest, I think it’s different.”

Aria approached Nada.  Her eyes focusing on his visor.  “Do you venerate the Atlas?”

Fearful it would harm Aria, Kailo and I moved towards the Priest.

“Stay where you are, the Priest means me no harm.  It’s only scanning me,” Aria ordered.

“Nada detected Atlas Stone in humanoid.  Suggestion.  What is it?  What are you?”  Its focus all on Aria.

“Don’t be fearful of me, I mean you no harm.  I know about the simulation.  I’m not of the Atlas, but I needed the Stone.  I took the stone from the Atlas.  It’s the only means to escape.”

“Escape!  Escape the simulation?  Interesting.  But there is no escape.  This is it!  That’s all there is.  Yes, there is escape.  But why go into the darkness?  Stress!  At the centre there is no darkness, only light.  Say.  Say!”

While the Priest continued to talk, counter arguing its own thoughts, I spoke to Aria privately, “It’s paranoid.  Are you sure it can help us?”

“Look, I know it sounds strange, and even deranged.  But there’s a logical explanation to its behaviour.  The Priest might still have a connection to the Convergence.  I think they’re trying to regain control; it must be a non-compliant Korvax.  It’s rare, but it can happen.  Remember, it’s a machine and has obviously encountered something contradictory to the information it has.  And so, it’s trying to sever itself from the Convergence.  It’s trying to make sense of this new information.  It wants answers.”

“And so do you,” the Priest said, sounding almost normal.  “I will help.  But you will help.  And we will all get information.”

Aria approached the Priest and peered into the lights in its visor.  “What do you want?”

“A quest I give.”  The Priest took Aria’s hand.

Like a slithering eel, a black cord from the Priest’s hand interfaced with her wrist.  Aria received coordinates to two small moons in this very system, and instructions.

“The ancient graves.  Two graves that dance and sing.  Defeat the Dancer in the Wind and the Singer in the Sea, and the blueprints will be yours.”  The Priest was calm, focused, his message unhindered by the Convergence, his sentences almost complete.  “Follow instructions.  Get blueprints.  Find facility and craft Golden Quantum Processor.  Bring device.  Free me and my friend, and I will free you.”

His friend, who was his friend?

Freedom has never been free.