The following day I sat on a moss-covered rock overlooking the cave’s cerulean blue lagoon with Nill standing beside me.  It was the first time I had been let out of the cave prison since I arrived.  I had convinced Nill that I had a plan, which I did in a way, but I needed to test it first.  And no, I didn’t have another plan if it failed.

“OK, let’s say you create a sphere here and we enter together, what’s stopping us from leaving?” I asked.

“Once I enter the sphere it will instantly dissipate, we’ll be left in the water together, and I really don’t mix well with water,” Nill stressed.  “In fact, water will damage me in a number of ways if I remain submerged in it for too long.  I’m not organic and my electrical parts dislike water, so I’ve learnt to stay dry.”

“So, you’ve tried it and it didn’t work, is that what you’re saying?”

“Yes, once.  A long time ago and I only barely managed to save myself from a total system failure.”

“What if I’m inside the bubble.  I enter first and you follow, joining me at the last moment.  Have you tried that?”

“Well let’s try that and see what happens.”

Nill didn’t reply, its head pulsated with thoughts.  It turned to face the lagoon and finally moved closer to the water’s edge.  I could see the white sphere of its head reflected in the water.  Nill stared at its vivacious reflection.

“Jump into the water,” he instructed.

I jumped in and began to tread water, while waiting to see what Nill would do next.

The water around me grew brighter as fireflies encircled me, spinning and pulsating, slowly forming a floating sphere.  The water drained away and I was left in an airtight balloon.  The top half was still open and exposed above the surface of the water.  Finally, Nill bent down to touch the top edge of the sphere.  Nothing happened.  The sphere remained intact.

“I think it’s safe.  If you try to climb in from the top, I think I can help you get in safely,” I said.

Nill paused to consider the options.  Then, hesitantly sat at the edge of the rock and slowly placed its feet first into the sphere.  I moved to grab Nill’s waist as he slid in.  I felt a sigh of relief coming from Nill as the rest of his body made its way down into the sphere beside me.

“Yes, I think you’re right,” Nill replied cautiously with a tone of relief in its voice.

The fireflies continued to seal off the rest of the sphere as we submerged below the water.

Then the sphere exploded, and the water came rushing in.  Nill panicked and grabbed me as it struggled to resurface.  I tried to stay calm and help Nill reach the rocks, pushing and avoiding its legs and arms, which were kicking and waving about frantically.

“Try to stay calm, Nill!” I shouted as I tried to move behind its back and place my arms around it.  “Stop swinging your arms and kicking, I’ve got you.”

Pops and hissing sounds emanated in the water from around Nill.  I looked down to see sparks and flashes stemming from its exposed knee and elbow joints.  There was no time to lose, I needed to get Nill out of the water as quickly as possible.

With all my strength I pulled Nill up, keeping its head above the water’s surface until I reached the rock edge.  I then twisted round and allowed Nill to face the rock.  Using its one working arm Nill pulled itself up as I helped to push Nill out of the water.

Nill eventually dragged itself back from the water and onto the rock.  I followed suit, bruised and battered.

The water had short circuited several of Nill’s body parts, which were still sizzling.  Its legs had malfunctioned and only one of its arms were working.  However, by keeping its head above water I’d prevented a complete system crash.

“Now we know that didn’t work,” I said, unsure how relieved I should be feeling that things hadn’t turned out worse than they did.

“Stupid idea!  I should have known better,” Nill’s voice squealed and scratched.  It’s voice synthesizer obviously effected from the water.

“Try?  What for, there’s no point in trying.  This prison’s my home, and yours now.  A watery grave.”

“We need to face facts.  I was a fool for trusting you,” Nill said.

I stood up and looked down at Nill splattered across the rock surface still dripping water.  It resembled a broken automaton whirling in its last dying ember.

“Do you always give up so easily?  I didn’t have you for a coward.”

Suddenly, a bright beam appeared in its spherical head, pointing in my direction, but then fizzled out in a puff of white smoke.  We both watched as the smoke slowly floated up to the cave’s ceiling and disappeared in the darkness.

“Do you always solve your problems by zapping everyone?”

“Shut up!” Nill squawked like a bird trapped in a hunter’s snare.

My response was spontaneous and not spiteful.  I burst out laughing.

Nill looked at me in a state of fury and confusion.  I could tell it was trying to understand what I was doing, why I was behaving this way.

My laughter seemed to be calming his temper and finally Nill started to croak, which I understood to be laughter as well.  We ended up laughing for so long that my stomach hurt.

But then we suddenly stopped.  Directly in front of us one of the tentacle face creatures appeared in the water.  Its head bobbing above the water surface.  It stared at us curiously, probably wondering what we were doing and what the laughter was all about.

Trailing the creature, a surge of water bubbled with froth in whirring vibrations as a large blue and orange object entered the lagoon and resurfaced beside the creature.  A rush of exultation overcame me 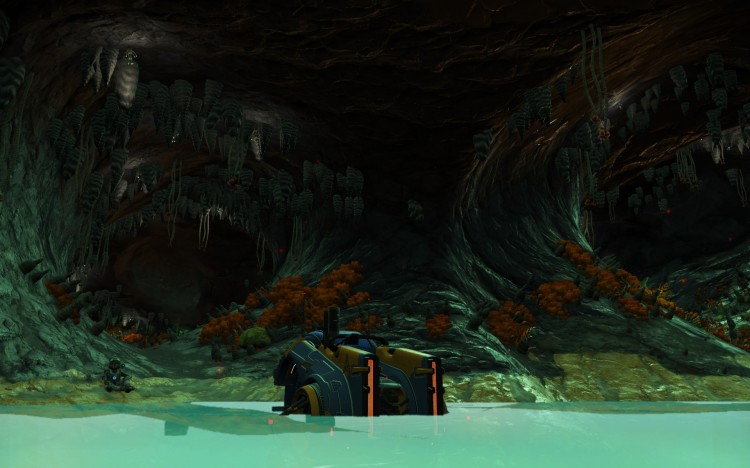 You don’t drown by falling into water. You only drown if you stay there.